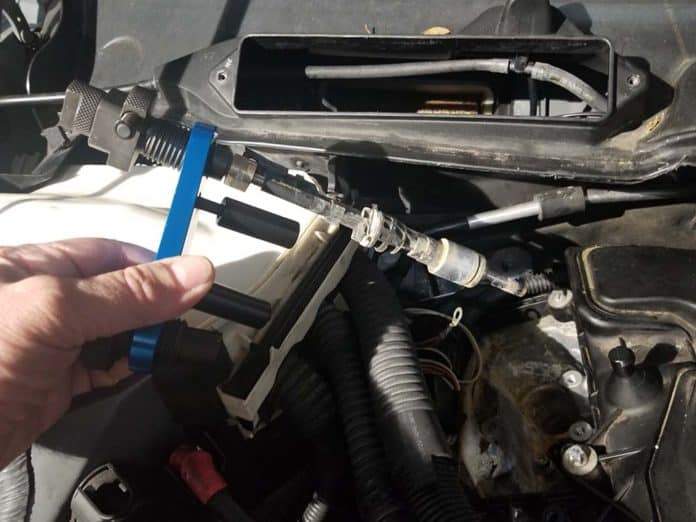 Repair Summary
This article gives detailed instructions on replacing the fuel injectors in a BMW N55 twin turbo engine. Even though we used a 2011 335i to perform this repair, this article can be applied to any BMW vehicle with the N55 twin turbo including the 1,3,5,7,X3,X6 and Z4 models minor modifications to the repair steps.

Please read the following before beginning this repair.

A BMW fuel injector replacement on the N55 twin turbo six cylinder engine is a lengthy repair, but will save you thousands of dollars on parts and labor by "Doing It Yourself" and not going to your local repair shop.

One of the unfortunate evils of owning a BMW with the N55 twin-turbo engine is increased maintenance. As wonderful as these engines are, they are notorious for their mechanical issues. Add the sad fact that many of the original owners of these cars didn't properly maintain them, and you have a recipe for impending disaster...especially on N55 engines with over 100,000 miles.
When you get north of 100,000 miles, you can pretty much expect to perform a BMW fuel injector replacement on these engines. Injectors get fouled over the years from poor fuel choices and not regularly using a good fuel additive like Techron. Driving a vehicle on fouled or clogged injectors can cause further damage and may ultimately lead to injector failure.
The BMW N55 engine uses direct injection which further complicates the matter. A direct injection is a form of fuel injection, where the gasoline is atomized directly into the cylinder under extremely high pressure. Direct injectors are prone to carbon buildup and are subjected to a continuously brutal environment inside the combustion chamber of the engine.
Fuel injectors in the BMW N55 engine are also prone to sticking open. This is a very serious condition where the injector continues to spray fuel into the cylinder. As the fuel builds up in the combustion chamber(s) it will cause multiple cylinder misfires and plumes of noxious white smoke to be ejected from the tailpipes. Driving the car in this condition will cause catastrophic damage to the engine and a tow truck ride to the scrap yard.

There seems to be some confusion as to what tool and method are best for extracting a fuel injector from the cylinder head of an N55 engine. The first rule of thumb is this; if your vehicle is close to/over 100,000 miles, most likely your fuel injectors will be stuck and require a removal tool to get them out.
Secondly, only use a BMW OEM extraction/installation tool and a good low torque wrench to remove and reinstall the injectors in your N55 engine. There are a lot of BMW owners out there that have come up with creative ways to pull out a stuck injector...from using coat hangers to dental picks and pliers. We urge our readers to use the proper tool and follow our instructions below on how to use it. The money saved by doing this repair yourself will exponentially outweigh the cost of buying the tool. And most importantly you will avoid any damage to the new injector or your engine.
Be aware that are two different tool mounting configurations in the BMW N55 engine; a horizontal configuration and a vertical configuration. Always check your mounting bolt layout before ordering your tool.
×
N55 Engine - All Models
View the video version of this repair.
View the detailed parts diagram for this repair.
Includes detailed part diagrams, part numbers and links to purchase all of the required components needed to complete this repair.

Before starting this repair, you must have the following required parts.
For N55 engine vehicles only with production date after 01/2011
These are the same factory fuel injectors that would be installed at the BMW dealership.
For N55 engine vehicles only with production date up to 01/2011
If you are experience a rough idle, misfire, or check engine light, this could be the problem. Fuel injectors for turbocharged BMWs have been a common failure item. It is highly recommended to replace older injectors also if your car is modified or you plan to modify it.
Fits all BMW vehicles
The decoupling ring is essential for proper fuel injector installation. Never use the old rings from the injectors you are replacing.
Repair Steps
Section 1 - Removing The Cabin Filter Assembly
The cabin filter assembly must be removed in order to access the rear fuel injectors in cylinders 5 and 6.
Section 2 - Intake Air Duct Removal
Section 3 - Preparing for Fuel Injector Removal
Section 4 - Removing and Installing Fuel Injectors
Please watch the following video on how to remove and install your fuel injectors using the N55 fuel injector tool. We have also included written instructions with photos after the video.