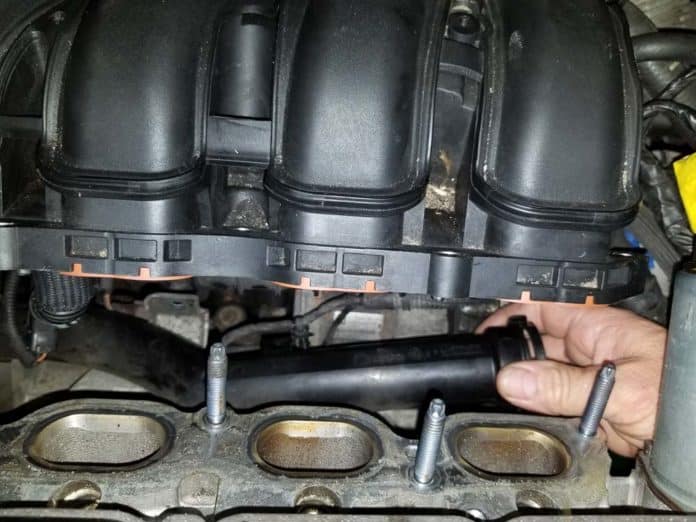 Affiliate link disclosure – The BMW Repair Guide uses affiliate links in their site. For more information on affiliate links, please click here.
Repair Summary
This article gives detailed instructions on replacing the water pipe in a MINI R56 vehicle. Even though we used a 2007 MINI Cooper to perform this repair, this article can be applied to any 2006-2013 MINI vehicle with minor modifications to the repair steps.

A MINI R56 water pipe replacement may be necessary if you are finding coolant under the vehicle near the rear of the engine.

As we have discussed in our other MINI R56 articles, the BMW/Peugeot Prince engine found in all 2006-2013 Cooper and Cooper S vehicles has had its fair share of issues. One of the more irritating problems that has haunted MINI R56 owners is failure of the coolant system's water pipe.
The MINI R56 water pipe is a rigid plastic conduit that runs laterally across the rear of the engine underneath the intake manifold. Its sole function is to deliver coolant from the water pump to the thermostat so it can be channeled into the cylinder head. Due to the compact transverse design of the Prince engine, the water pump and thermostat ended up on opposite sides of the engine compartment - the plastic water pipe completes the connection between the two.
Like all plastic parts in the engine compartment, age and the brutal heat conditions take their toll on the MINI R56 water pipe. Often the water pipe cracks inside the water pump fitting causing its o-ring to leak. In extreme circumstances, the body of the water pipe can fracture causing a complete loss of coolant. A MINI R56 water pipe replacement should be immediately performed at the first signs of failure.
Classic signs that your MINI R56 has a failing water pipe are puddles of coolant on the ground under the rear of the engine and constantly having to "top off" your coolant expansion tank.

Before starting this repair, you must have the following required parts.
MINI R56/R57
Located between the water pump and the thermostat housing / MINI Cooper coolant pipe.
Fits all MINI R56/57 models - 06/2010 through 03/2012 require adapter lead (see description)
Typically referred to as the thermostat neck / housing, this part mounts on the highest point on the head and controls the flow back to the pressure tank. Cracking, which usually occurs around the gasket seal and leaks, are symptoms that it's worn out.
Fits all MINI R56/57 models.
Used for thermostat replacement, wire adapter lead.
All MINI R56/57 vehicles
This gasket fits between the engine head and the composite material intake manifold. Needed when there is an air leak or removing the intake for installation.
All MINI R56/57 vehicles
This single profile gasket mounts to the side of the intake manifold near the throttle housing.
category = 3727category = 3728
Repair Steps
Section 1 - Removing the Intake Manifold
As discussed at the beginning of this article, the correct way to perform a MINI R56 water pipe replacement is to remove the intake manifold. The water pipe must be grasped with both hands during reassembly to make sure it is pressed inside the water pump correctly - this is simply not possible with the intake manifold installed. We urge our readers to not consider removing the intake manifold as an inconvenience, but rather as an excellent opportunity to service other high maintenance parts like the intake manifold gaskets, throttle body gasket and fuel injectors.
Section 2 - Removing the Thermostat
As discussed at the beginning of this article, the thermostat must now be removed in order to finish removing the water pipe. The reason is that the left side of the water pipe is connected to a thermostat coolant inlet...there is, unfortunately, no way to separate and remove the water pipe while the thermostat is still mounted to the engine.
Section 3 - Removing and Replacing the MINI R56 Water Pipe
Now that the intake manifold and thermostat have been removed from the engine, replacing the water pipe is fairly easy. Remember to always double-check the water pump to make sure there are no broken fragments of plastic or o-ring left from the water pipe. Also, it is very important to note that you should only use a small amount of liquid dish detergent when lubricating the water pipe o-ring for insertion into the water pump. It is recommended that you do not use petroleum-based lubricants on the o-ring...they could cause it not to seal properly.
Section 4 - Reassembling the Vehicle
Reassembling the vehicle is very straightforward with no special procedures outside of following the above steps in reverse. There are a lot of steps...take you time and use patience during reassembly to ensure you don't miss any connections. We have provided the following checklist with important torque values for your convenience.

***The following steps were performed on a 2007 MINI Cooper...other models may vary.
Section 5 - Refilling the coolant system
Now that the MINI R56 water pipe has been replaced, you will need to refill the coolant system and bleed it of any trapped air. The BMW Repair Guide recommends using a coolant vacuum fill tool to properly refill the coolant system in your MINI vehicle. If you do not have a vacuum fill tool, you can use the following manual method of filling and bleeding your system. It is very important that any trapped air in the coolant system is bled out to avoid engine overheating.
Share
Facebook
Twitter
Pinterest
WhatsApp
Previous articleBMW Intake Manifold Gasket Replacement – M60 V8 5,7,8 Series
Next articleBMW M60 PCV Valve Replacement – 5,7,8 and X5 Series 8 Cylinder