By Staff Writer
October 30, 2020
0
18028
Share
Facebook
Twitter
Pinterest
WhatsApp
Repair Summary
This article gives detailed instructions on replacing the main accessory (serpentine) belt, tensioner and idler pulleys in a BMW E60/E61 5 series vehicle with the N52 6 cylinder engine. Even though we used a 2006 E61 touring wagon to perform this repair, this article can be applied to any vehicle with the N52 engine including 1,3,5,6,7,X1,X3, and Z4 models with minor modifications to the repair steps.

A BMW E60 belt and pulley replacement can help cure that "whining" sound coming from the engine compartment.

If you have owned a BMW E60 5 series vehicle for an extended period of time (or have currently purchased a high mileage one), then you will eventually experience the trademark "whining" or "squealing" sounds from the engine compartment characteristic of failing pulley bearings. In fact, if you hear any type of squeaking from the engine after starting your 2006-2010 5 series, there is an extremely high probability that it is either a worn tensioner pulley, deflection pulley, or serpentine belt.
The tensioner pulley on the BMW E60 5 series is a spring-loaded mechanism that applies pressure to the main accessory (serpentine belt) so it does not slip. Over time the bearings inside the tensioner pulley wear out causing a "squealing" sound...most noticeably while the engine is idling. The deflection pulley, located next to the alternator, helps to efficiently route the main accessory belt around the left side of the engine - it is also prone to worn bearings as it ages. It is good practice to always replace both the BMW E60 tensioner pulley and the deflection pulley together...it is virtually impossible to detect which one is failing since they are located so close together.
The BMW E60 main accessory belt, also known as the serpentine belt, harnesses the power from the crankshaft pulley to operate the alternator, power steering pump, and air conditioning compressor (the water pump on 2006-2010 5 series vehicles with the N52 engine is electric and is not driven by the serpentine belt like in earlier models). Time and the brutal heat conditions inside the engine compartment take their toll on the serpentine belt, causing it to dry out and eventually crack. Severely worn BMW E60 serpentine belts will begin to slip on the accessory pulleys causing a nerve grating screeching sound. A worn serpentine belt should be replaced immediately to avoid catastrophic engine damage in the event it breaks while driving.
Replacing the BMW E60 belts and pulleys
In 2006 BMW introduced the new generation N52 6 cylinder engine in many of the E60/61 5 series models. One of the most notable advancements in the N52 engine was that it only operated with one accessory drive belt instead of two; it no longer had the secondary AC drive belt found in its 6-cylinder predecessors like the M54. This made changing the belt and pulleys a much easier procedure on the N52 engine since the front end of the vehicle did not have to be raised to access the lower AC belt. The N52 engine was also manufactured with an electric cooling fan - a welcomed change for mechanics who now had more room in front of the belts and pulleys for servicing.
A BMW E60 belt and pulley replacement is an easy repair for the home mechanic with average abilities and can save a very expensive trip to the dealership. Since the belt and pulleys can be easily accessed from the top of the engine compartment on 2006-2010 5 series vehicles, it is a repair that can be done safely in a driveway or garage without the need of special equipment. We give you full step-by-step instructions on doing the repair along with a comprehensive parts list for your convenience.
Required Parts
Factory Part Belt tensioner - Genuine BMW 11288624196
All vehicles with the BMW N52 engine
This is the same factory belt tensioner that would be installed at the BMW dealership.

All vehicles with the BMW N52 engine + Prime FREE One-Day Shipping
Amazon offers an outstanding alternative to the pricey Genuine BMW belt option with prime shipping included. URO Parts offers a huge variety of replacement parts for European vehicles. Leading parts distributors and retailers rely on URO because of its compelling blend of quality and value. Deflection pulley - Genuine BMW 11287535860
All vehicles with the BMW N52 engine
This is the same factory deflection pulley that would be installed at the BMW dealership.

All vehicles with the BMW N52 engine + Prime FREE One-day Shipping & Returns
URO again supplies, through Amazon, a direct OEM replacement deflection pulley with guaranteed fitment for your BMW. With free prime shipping and returns, we highly recommend this pulley from URO. URO Parts offers a huge variety of replacement parts for European vehicles. Leading parts distributors and retailers rely on URO because of its compelling blend of quality and value.

All vehicles with the BMW N52 engine + Prime FREE One-Day Shipping
Gates has worked with most of the top car manufacturers in the world to produce our Micro-V belts with OE quality to fit virtually any vehicle on the road today. Gates innovative EPDM Micro-V belts are trusted by countless automotive technicians due to their quiet performance, wear-resistant construction, and tightest tolerances in the industry.

All in One Kit w/ FREE Prime Shipping and Returns
If you're not too thrilled about purchasing each part from separate vendors, this all-in-one kit by Contitech has everything you need to complete this repair in a single package delivered to your door with prime shipping. Included in the kit are the belt tensioner, deflection pulley, and accessory belt making it easy for those of us who prefer not to track each part number down individually. Highly recommended.

All BMW E60 6 cylinder vehicles
Often overlooked, a clean air filter can make a noticeable difference in performance and fuel economy in your vehicle. When a vehicle's air filter is not properly serviced, it restricts air flow into the engine which directly translates to less horsepower to the wheels. This Part Fits the Following Vehicles: All BMW E60 6 cylinder vehicles

Repair Steps
Section 1 - Removing the BMW E60 Accessory Drive Belt
Removing your 5 series' serpentine belt is an easy procedure thanks to the extra room that was created in front of the engine when BMW changed over to an electric cooling fan. We strongly recommend taking the extra few minutes and removing the intake muffler. This will give you clear access to the left side of the engine and will make the repair go a lot smoother. It will also allow you to remove the tensioner pulley in Section 2 without disconnecting any coolant lines.
Section 2 - Removing the BMW E60 Tensioner and Deflection Pulleys
Removing the tensioner and deflection pulleys from the N52 six cylinder engine in your 5 series vehicle is a simple procedure. As we stated earlier, thanks to the use of an electric cooling fan, there is now plenty of room in front of the engine to get a socket wrench in with disassembling a lot of parts.
Section 3 - Reassembling the Vehicle
Installing the new pulleys and serpentine belt is very straightforward with no special steps. Make sure you route the new serpentine belt correctly...please see the routing diagram below for the N52 engine. We have provided a handy installation checklist, along with critical torque values for the pulley bolts.

***The following steps were performed on a 2006 BMW 530xi touring wagon ...other models may vary. 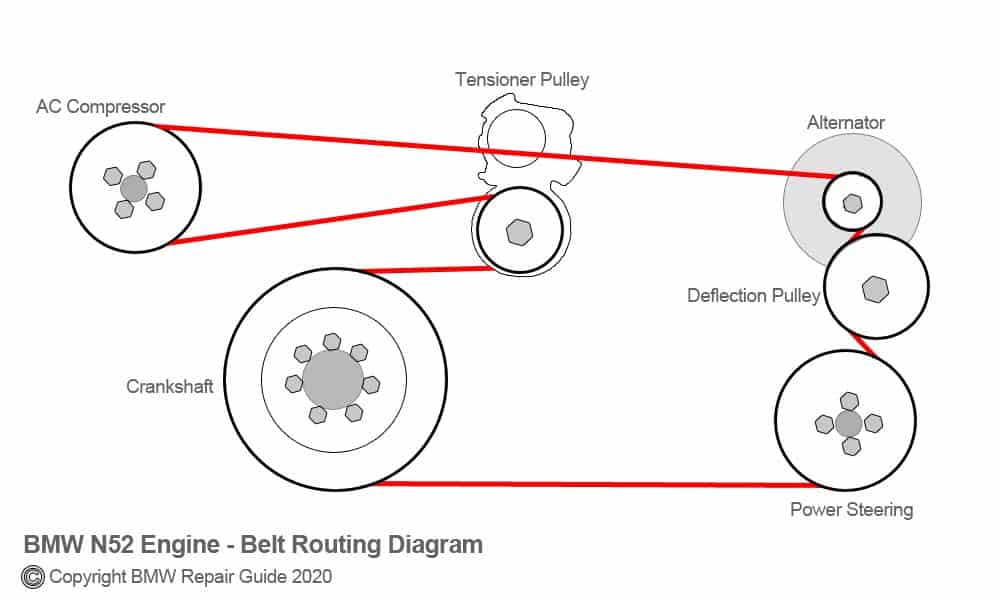 BMW E60 Belt and Pulley Replacement Finished
You must log in to view all of the repair steps!
In order to bring you the best possible content, we now require our readers to log in to their account to view the repair steps.
Click here to login to your account.
Don′t have an account? Register now...its simple and free! 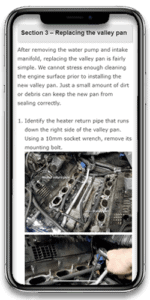