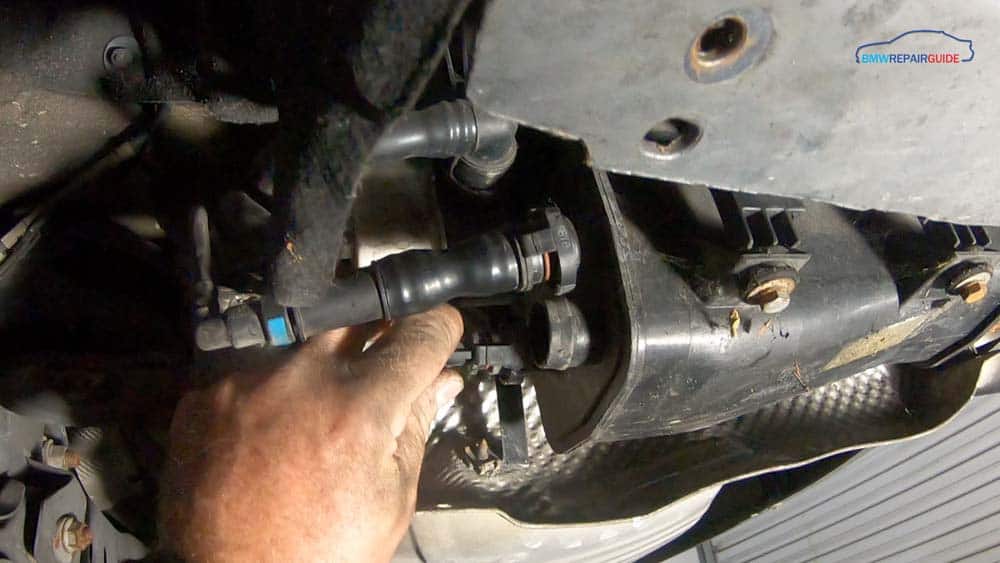 Affiliate link disclosure – The BMW Repair Guide uses affiliate links in their site. For more information on affiliate links, please click here.
Repair Summary
This article gives detailed instructions on replacing the fuel leak detection pump and charcoal filter in BMW E9x vehicles. Even though we used a 2011 335i to perform this repair, this article can be applied to any 2007-2013 3 series vehicles with minor modifications to the repair steps.

Replacing the fuel leak detection pump and charcoal filter in your 2007-2013 3 series is a simple repair that can save you a very expensive trip to the dealership.

The BMW E90 fuel leak detection pump is an important part of your vehicle's emissions system. As its name implies, its sole function is detect a vapor leak in the fuel system that would allow gas fumes to escape and contaminate the atmosphere. The BMW E90 fuel detection pump achieves this by temporarily pressurizing the fuel system with air. The fuel leak detection pump monitors this air pressure - if it drops even slightly, it notifies the engine control module (ECU) there is a vapor leak in the fuel system activating the Service Engine Light (SEL) and displaying a fault code on a diagnostic scanner.
The charcoal filter in 2007-2013 3 series vehicles is also an important part of the emissions system and is located adjacent to the leak detection pump. The filter traps and stores any fuel vapor in the system until it can be returned back to the engine for combustion (also known as "purging"). Since the charcoal filter and leak detection pump work in tandem with each other, both should be replaced together.
The symptoms that the fuel leak detection pump in your BMW E90 is failing are clear and concise - a Service Engine Light will appear in the instrument cluster followed by one of the following fault codes on a diagnostic scanner: P2400,P2401 or P2402.
The good news is replacing the BMW E90 fuel leak detection pump and charcoal canister in your 2007-2013 is very straightforward. They are both located under the rear left bumper which is easily accessed by removing just a few screws. We suggest using a floor jack to lift the rear of the vehicle to make the job go smoother. We give full step-by-step instructions including a video, exploded parts diagram, and parts links below for your convenience.
×
E9x 3 Series - All Models
View the video version of this repair.
View the detailed parts diagram for this repair.
Includes detailed part diagrams, part numbers and links to purchase all of the required components needed to complete this repair.

Before starting this repair, you must have the following required parts.
Fits all BMW E9x vehicles.
Leak detection pump tests fuel containment system for vapor leaks to atmosphere. A failed pump will illuminate the service engine light in the vehicle's instrument cluster.
Fits all BMW E9x 3 series vehicles.
The charcoal filter stores fuel vapor so it can be returned to the engine for combustion. It should always be replaced with the fuel leak detection pump to ensure your vehicle passes emissions.
Repair Steps
Section 1 - Removing the BMW E90 fuel leak detection pump and charcoal filter
The fuel leak detection pump and the charcoal filter (canister) is located underneath the rear left bumper in all 2007-2013 3 series vehicles. Performing this repair with the vehicle on the ground is extremely difficult and should be avoided - simply lifting the rear of the vehicle with a floor jack will allow the repair to go smoothly.
BMW E90 Fuel Leak Detection Pump and Charcoal Filter Replacement Finsished
Share
Facebook
Twitter
Pinterest
WhatsApp
Previous articleBMW EVAP Leak Diagnosis and Repair – Evaporative Emissions System
Next articleBMW E90 Passenger Seat Occupancy Sensor Repair- 2007-2013 3 Series