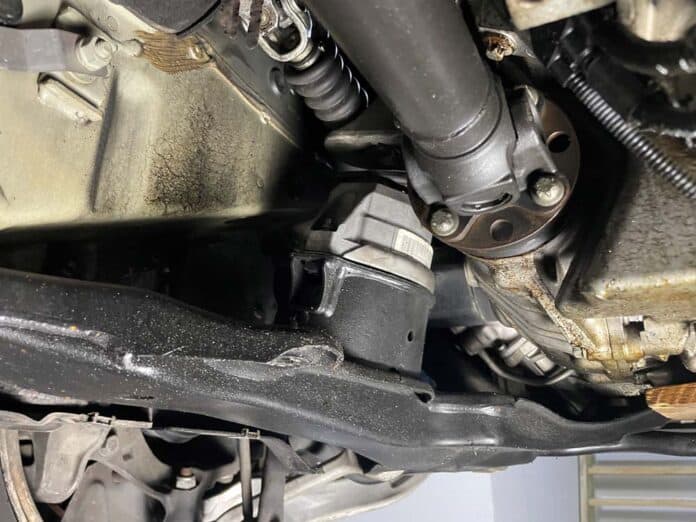 Repair Summary
This article gives detailed instructions on replacing the engine mounts in a BMW E60/E61 5 series sedan or touring wagon. Even though we used a 2006 530xi touring wagon to perform this repair, this article can be applied to any 2004-2010 5 series with minor modifications to the repair steps.

A BMW E60 engine mount replacement may be needed if your 5 series is making excessive interior vibration sounds.

The BMW E60 motor mounts help cushion the vibrations produced in the engine compartment by providing a buffer between the engine block and the frame of the vehicle. The motor mounts main function is to eliminate metal-to-metal contact between the engine and the frame, effectively canceling harsh vibrations within the interior of the car.
The BMW E60 5 series engine mounts are comprised of a thick rubber bushing and oil-filled chamber encased in a heavy-duty steel shell. Like all mechanical engine parts, the motor mounts have a definitive life cycle and do eventually fail. The lifespan of 5 series engine mounts varies depending on driving habits, but it's our experience that they start to fail around 120,000 miles on the E60 sedan and E61 touring wagon.
The classic sign of failing (or loose) motor mounts is excessive vibration inside the vehicle. This vibration usually intensifies quickly causing squeaking ceiling and door panels and elevated interior noise levels. Many mechanics mistakenly diagnose this vibration as a vacuum leak - which can also produce the same effect. Another sign of failing E60 motor mounts is a brown liquid seeping from the bottom of the steel shell. This means that the interior fluid chamber has ruptured - the mounts should be replaced immediately if this is observed to avoid structural damage to the frame or engine block.
Replacing the engine mounts on the BMW E60 5 series is tricky, especially on all-wheel xDrive models like the one used to make this article. The engine must be raised in order to remove the mounts. Further compounding the issue is there is limited space to get the mounts out of the frame once the engine is lifted. Unfortunately, the only way to remove them is to raise the vehicle and remove them from the rear of the engine...a difficult maneuver without a lift and jack stand to support the engine. If you are a home mechanic doing this repair, make sure the entire vehicle is raised and supported on ramps (at all four wheels) so the rear of the engine can be accessed from underneath the vehicle.
×
E6x 5 Series - All Models
View the detailed parts diagram for this repair.
Includes detailed part diagrams, part numbers and links to purchase all of the required components needed to complete this repair.