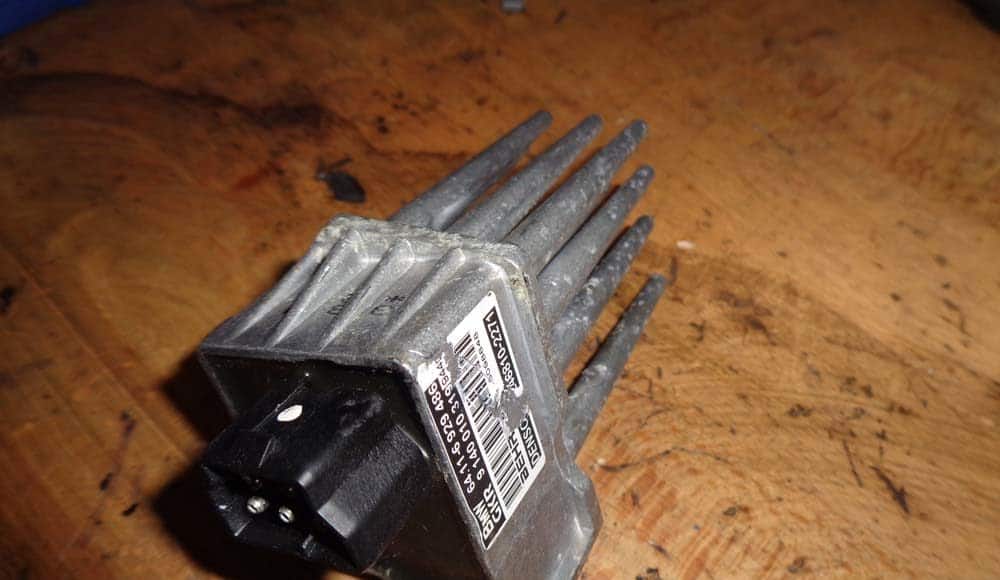 If the air has stopped blowing in your 3 series, then you probably need to replace your BMW E46 blower resistor and blower motor assembly. When one part fails, the other is not far behind, so it is best to replace both.

***This article deals with replacing the BMW E46 blower resistor only. To learn how to replace the blower motor on your car, read our article BMW E46 Blower Motor Replacement.
Replacing a BMW E46 blower resistor is a pain in the neck...literally. The blower resistor (also known as the "final stage") for the E46 3 series was mysteriously buried by BMW engineers in the passenger side footwell at the back of the center console. Replacing it requires laying on your back and executing a few advanced yoga moves.
The good news is a new BMW E46 blower resistor is fairly cheap, and you need very few tools to perform this repair. And the even better news is this repair will save you a ton of money by not getting a repair shop involved.
The BMW E46 blower resistor is an electronic part that controls the fan speed of your vehicle's heating, ventilation, and air-conditioning (HVAC) system. Since most drivers constantly change the fan speed of their HVAC system, the resistor is prone to extreme wear and is a common point of failure in most BMWs. Symptoms of a bad resistor are: the system is stuck on one fan speed, some speeds are not available, or the system is not blowing any air out of the vents. Although not necessary, the BMW Repair Guide suggests changing your BMW E46's blower motor as well when replacing a bad resistor; since both parts are linked to each other, failure of one usually means the other is not far off from breaking as well.
×
E46 3 Series - All Models
View the detailed parts diagram for this repair.
Includes detailed part diagrams, part numbers and links to purchase all of the required components needed to complete this repair.

Before starting this repair, you must have the following required parts.
All BMW E46 models
Do you have only one speed left in your blower motor? If you do, the problem doesn’t lie in your blower motor. Instead, it could very well be the Resistor Pack.
All BMW E46 models
A great alternative to higher-priced brands, this blower resistor by URO produces a high-quality blower resistor for a fraction of the price of Genuine BMW. We highly recommend this if you're operating under a strict budget, or simply do not wish to pay the exorbitant price of Genuine BMW resistors.
All BMW E46 models
If your car's heating and cooling system is malfunctioning, a new blower motor might be needed to get that problem corrected. The blower motor is an electric motor that moves air inside the car for heating and cooling. If it breaks, your car's systems might not work and the dealership might attempt to get every penny out of your pockets. PURCHASE NOW
Repair Steps
Section 1 - Removing the BMW E46 Blower Resistor
Section 2 - Installing the New BMW E46 Blower Resistor
To install the new blower resistor, simply follow the above steps in reverse order. Be aware there are a couple tricky parts during installation.
BMW E46 Blower Resistor Replacement Finished
Share
Facebook
Twitter
Pinterest
WhatsApp
Previous articleBMW E85 Convertible Microswitch – 2002-2008 Z4 – Convertible Top Failure
Next articleBMW E90 Cooling Fan Replacement – 2007-2013 3 Series – All Models