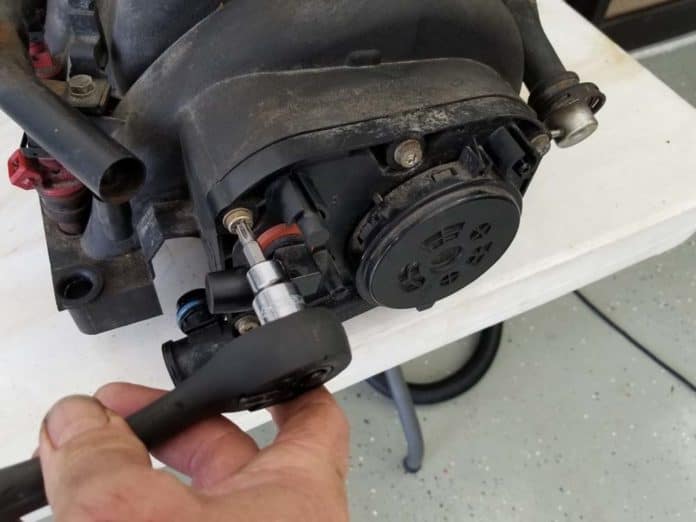 Affiliate link disclosure – The BMW Repair Guide uses affiliate links in their site. For more information on affiliate links, please click here.
Repair Summary
This article gives detailed instructions on replacing the PCV valve in a BMW M60 8 cylinder engine. Even though we used a 1995 840i to perform this repair, this article can be applied to any vehicle with the M60/M62 V8 engine including 5, 7, 8 and X5 series vehicles with minor modifications to the repair steps.

The BMW M60 PCV valve is a common source of vacuum leaks and a rough idling engine.

The PCV valve (or positive crankcase ventilation valve) is located on the rear of the intake manifold on the BMW M60 V8 engine. It is a simple one-way check valve that allows the gases that build up in the crankcase to be channeled back into the intake manifold for combustion. It is considered part of the emissions system since it recycles gases that did not ignite during combustion ("blow-by gas") instead of allowing them to be vented into the atmosphere.
Like all the other parts in the engine compartment of your vehicle, the BMW M60 PCV valve has a definitive service life and will eventually need to be replaced. There are many signs of a failing PCV valve; the most prominent examples include a rough or erratic idling motor, engine surging while idling or driving, and a leaking PCV valve gasket. The PCV valve, its gasket and all of its rubber vacuum caps should be always be replaced together.
What is the correct way to replace the BWW M60 PCV valve?
The proper method of replacing the BMW M60 PCV valve remains a common source of contention among BMW mechanics. Because of its close proximity to the firewall, it is very difficult to navigate around the rear of the intake manifold...especially with a socket wrench and Torx bit. Compounding the difficulty is the fact that the heads on the mounting bolts securing the PCV valve to the intake manifold are notorious for stripping. Some mechanics have been known to use a Dremel tool to cut the heads off of the PCV valve mounting bolts to avoid removing the intake manifold. This is not an acceptable way to remove the PCV valve on an M60/M62 engine and should never be attempted.
As you can see from the following photo, space is very limited behind the PCV valve on this 1995 840i with an M60 8 cylinder engine. These mounting bolts are virtually impossible to remove with a socket wrench and Torx bit.
The correct method for removing the PCV valve on the M60/M62 engine is to first remove the intake manifold from the vehicle. Removing the intake manifold allows clear unobstructed access to the PCV valve so it can be serviced properly without damaging any other components in the engine compartment. It's also an excellent time to replace the intake manifold gaskets that could have been damaged by the faulty PCV valve, as well as a rare opportunity to service other important parts like the valley pan gasket, the fuel injectors, and cleaning the engine. Removing the intake manifold should not be considered a deterrent to performing a BMW M60 PCV valve replacement, but rather a chance to get caught up on all of the other well-needed services that your V8 needs.
×
M60 Engine - All Models
View the video version of this repair.
View the detailed parts diagram for this repair.
Includes detailed part diagrams, part numbers and links to purchase all of the required components needed to complete this repair.

Before starting this repair, you must have the following required parts.
BMW M60/M62 engine
An integral part of the emissions system, the PVC valve lets the crank case breathe. This allows proper intake and exhaust flow, resulting in proper running and operation. Often split from underhood heat and age, this vents excess oil into the engine compartment. Replace it now.
BMW M60/M62 engine
This is the same factory PCV gasket that would be installed at the BMW dealership.
Commonly used in many different models.
5mm rubber vacuum cap.
Commonly used in many different models.
10.5mm rubber vacuum cap.
All BMW M60 and M62 engines
Used as both a throttle body and crankcase vent mounting bolt on M60 and M62 8 cylinder engines. These T30 torx bolts are notorious for stripping due to a combination of soft metal and age. M6x25
M60 and M62 engines
This is the vacuum tube that connects the fuel pressure regulator to the PCV valve.
BMW M60/M62 engine
Four gaskets are required. Faulty intake manifold gaskets can cause vacuum leaks and cause your engine to run poorly. Replaced every time you remove the intake manifold, it's important to know everything is sealed up and running good.
BMW M60/M62 engine
10 are required. These are high quality spacer bushings from an Original Equipment Supplier.
category = 37category = 2353category = 2355category = 2354category = 2739category = 1956
Repair Steps
Section 1 - Removing the Intake Manifold
Removing the intake manifold from an M60/M62 engine is a very straightforward procedure and should not be intimidating in any way. It is important to remember that you are working on an engine that is close to 30 years old. Use patience and care during disassembly...especially with plastic parts like the wiring harness ("loom"). Forcing the wiring harness connections apart can cause them to crack and break, turning your intake manifold replacement into a $1000 plus repair. For more a more detailed discussion on the M60 intake manifold, please see our article BMW M60 Intake Manifold Gasket Replacement – V8 5,7,8 Series.
Section 2 - Replacing the PCV Valve
Now that the intake manifold has been removed from the vehicle, replacing the PCV valve and its gasket is a simple procedure that can be done the correct way. Removing the intake manifold on your M60/M62 engine is a rare event, so take advantage of the opportunity to do some housecleaning and service! Now is also an excellent time to clean the intake manifold and remove any carbon deposits. It is also an exceptional time to clean the engine block, valve covers and cylinder head. Removing the intake manifold gives you clear access to the valley pan gasket and the water temperature sensors in the cooling system that probably need to be replaced. Save yourself time and money and do every service item you can while the manifold is removed from the vehicle.
Section 3 - Final Reassembly
Reassembling the vehicle is very straightforward with no special procedures. We highly recommend replacing the intake manifold gaskets and spacer bushings during reassembly...it will ensure your manifold has a nice tight seal without any vacuum leaks (see our parts list if you have not purchased any). Take your time during reassembly making sure not to miss any vacuum or electrical connections. We have provided a comprehensive checklist with the exact steps for reassembly. It also includes all of the critical torque values for your convenience. 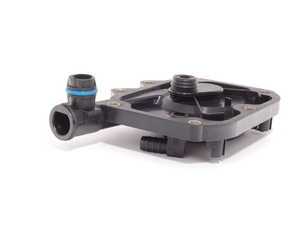 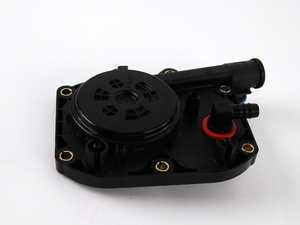 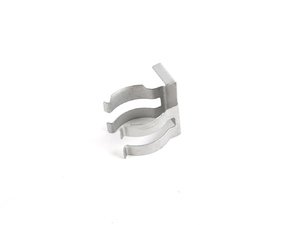 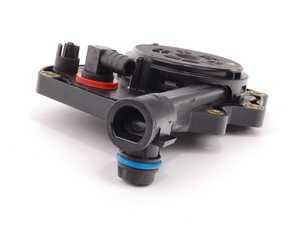 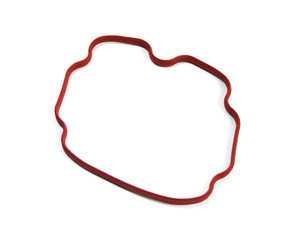 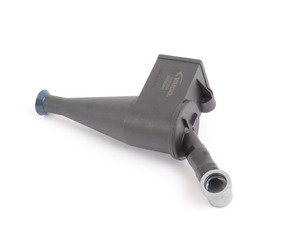 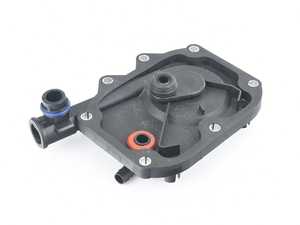 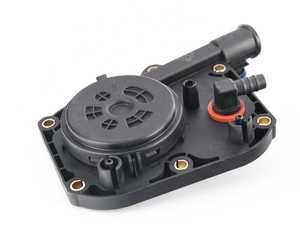 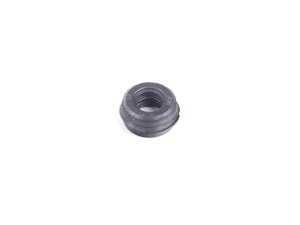 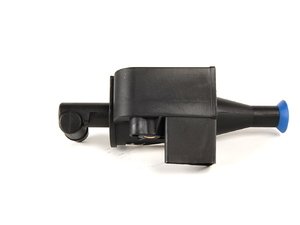 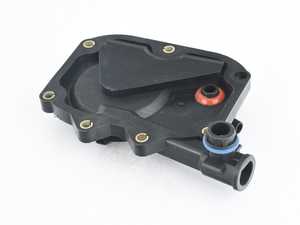 Bavarian Autosport Intake Manifold Cover (PCV)
Part #: 11617501562
$40.53
$40.53
An integral part of the emissions system, the PVC valve lets the crankcase breathe. This allows proper intake and exhaust flow, resulting in proper running and operation. Often split from underhood heat and age, this vents excess oil into the engine compartment. Bavarian Autosport served the needs of BMW and MINI enthusiasts from 1974-2019. In 2019, ECS Tuning acquired the Bavarian Autosport brand, committing to continuing the tradition of excellence Bav Auto is known for. Over the years, Bav developed their own brand of parts, accessories and upgrades. A lot of these parts are engineered and built by OEMs (Original Equipment Manufacturers - companies who make original parts for BMW, MINI, and other European marques). Just as BMW and MINI do, we work with a variety of manufacturers in Europe, Asia and North America. In many cases, we have sourced parts that are superior to Original Equipment. A lot of time and resources have been put into developing and evaluating these products, as well as the companies who produce them. We stand behind every product we sell. If any product fails to meet our standards - or our customers' expectations - we won't sell it, and we're certainly not going to put the Bavarian Autosport name on it. In fact, we're so confident in the quality of these parts that we back every Bavarian Autosport brand part with a 2-year warranty. Fits: BMW E31 840Ci M60 4.0L, BMW E32 740i, BMW E32 740iL, BMW E34 530i M60 3.0L, BMW E34 540i M60 4.0L, BMW E38 740i M60 4.0L, BMW E38 740iL M60 4.0L
http://click.linksynergy.com/link?id=whPkjrNnIYw&offerid=580643.18652387818&type=15&murl=https%3A%2F%2Fwww.ecstuning.com%2Fb-bavarian-autosport-parts%2Fvacuum-control-valve-egr%2F11617501562%7Ebav%2F 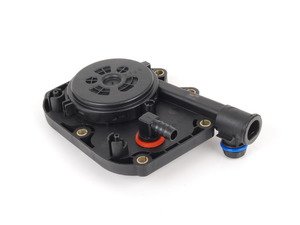