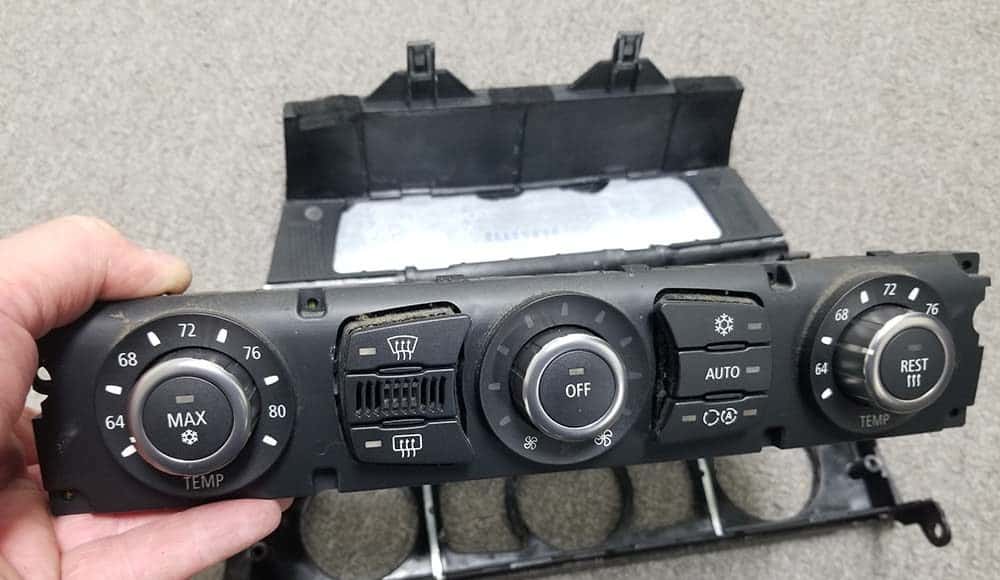 Affiliate link disclosure – The BMW Repair Guide uses affiliate links in their site. For more information on affiliate links, please click here.
Repair Summary
This article gives detailed instructions on replacing the climate control dash unit in a BMW E6x 5 or 6 series vehicle. Even though we used a 2005 645ci to perform this repair, this article can be applied to any 2004-2010 5 or 6 series vehicle with minor modifications to the repair steps.

A BMW climate control failure will cause several obvious symptoms including the inability to change the vent settings in the vehicle's iDrive screen.

We recently encountered a strange situation here at the BMW Repair Guide involving our 2005 645ci. Every time we tried to change the vent settings in the iDrive unit, they would immediately revert back to their default levels. Simply put, we could not change the temperature in the car. We also noticed that every time we started the vehicle, the air conditioning fan speed would default to its highest setting.
A quick scan with our diagnostic tool pulled up the following fault code for the vehicle; 9C7B IHKA: Interior temperature sensor fan. The 9C7B fault code simply means the fan attached to the back of the climate control unit in your dashboard is not working. The fan's sole purpose is to draw cabin air into the climate control so it can function correctly. Unfortunately after replacing the fan, the error code remained, and the climate control/iDrive units still malfunctioned.
After further analysis, we determined the actual climate control dash unit was defective. After installing a new HVAC climate control unit the system returned to normal operation. No more error code, no more climate control or iDrive malfunctions. Problem solved.
BMW climate control dash unit failure in 2004-2010 5 and 6 series cars have unfortunately become a normal occurrence. The reason why they are failing is not immediately known. The good news is replacing your BMW climate control unit is a relatively simple procedure, even for the novice mechanic. The following are step-by-step instructions on how to do the repair. We also give you a parts list for your convenience.
×
E6x 5 Series and E6x 6 Series - All Models
View the video version of this repair.
View the detailed parts diagram for this repair.
Includes detailed part diagrams, part numbers and links to purchase all of the required components needed to complete this repair.